Before I get to the story, I want to make sure that it’s clear that you should never ever do this under any circumstance, ever. This was a completely innocent mistake. The reason I am sharing this with you is to show you that everyone is human, and that facing a mistake head-on and actually handling the situation can have great results.

I’ve had a long-term client for a couple of years who has hired me to do things from time to time. We’ll call this client Cassie. I landed work with Cassie due to a referral from a close friend who I’ll call Stella. Stella and I used to work together in-house, and she went on to work at a Cassie’s office. Her boss needed a good web designer to redesign her website, so Stella referred her to me.

Stella was at that point in her life where she’d found the love of her life and had gotten married. She’d moved away, to a new city where her husband found work, and was now pregnant, which is exciting for any newlywed couple.

The Fail of All Fails

A few days ago, I’d gotten a phone call, and it was Stella! I was excited, because I hadn’t gotten to talk to her since she found out she was pregnant. We’ve always been close friends, and she has a great sense of humor. So I answered the phone with a big “Hey!” and I got a big “hey!” back. So, just joking around, I said:

“Hey prego, how’s pregnant life?” There was a slight pause. The response wasn’t what I expected.

I replied “How is the pregnancy going?” 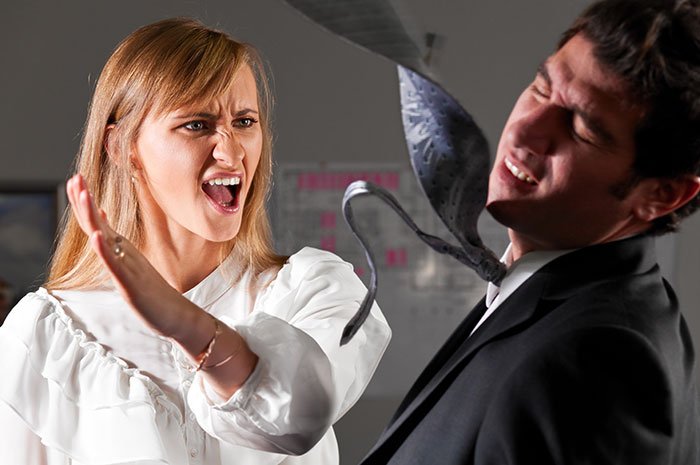 Knowing who I thought it was, she said “This is Cassie.” My heart sank, along with all of my other internal organs. My face became flush, and a wave of hot and cold ran from my forehead down to my cheeks. A cold sweat began to form, as I realized what I’d done. I was raised with the idea that you never imply that any woman is pregnant when she isn’t. My heart raced, my hands got a little sweaty, and I know my mouth had to be wide open in terror.

What I didn’t know, was that Stella was provided a phone by Cassie for business. When Stella left Cassie’s business and moved away, she had to return the phone to Cassie. Cassie’s own phone had broken, so she replaced it with Stella’s old phone. That’s where the mix-up came from. That’s why my phone still had her labeled as still as Stella’s number.

How I Turned Things Around

Under different circumstances, this incident might have ended up like the picture above. Fortunately for me, I am good at diffusing potentially disastrous situations. The most immediate way to turn any bad situation around is with an immediate and sincere apology. That apology came sputtering out, accompanied by nervous laughter. My friends think of me as sort of a comedian, because I’m always joking around. Cassie had worked with me for quite a while, so she knew my character very well, and knew that it was an honest mistake. Luckily, Cassie has a sense of humor as well, and she laughed off the entire ordeal. Talk about cramming your foot in your mouth at warp speed.

It Was Time For Me To Listen

Cassie had actually called for a reason. She had a worker in her office who handled a lot of tasks for her, including her email marketing, newsletter, as well as a few promotional materials. Cassie was overwhelmed, because her office worker had pick up and moved to Connecticut. She was at the point where she was trying to handle everything herself, including appointments, and phone work.

She was calling because she needed my help in adding a couple of graphics to her website. After listening to her needs, as well as learning about some new things that she was trying to accomplish, I mentioned some of the newer services that I provide. These services were cost-effective for her business, and provided me with steady income. We set up a meeting for the middle of this week to talk about what I can do for her, and for us to come to an agreement on terms.

The Moral Of The Story

The reason I shared the story isn’t to tell you to never mess up. It’s going to happen, no matter how good you are at what you do. Mix-ups happen and they are inevitable. In life and in business, it’s not the mistakes that you make that are important, but how you recover from them. A sincere apology goes a long way. If you always provide good service to your clients, when you make an honest mistake like the one in the story above, your clients will give you the benefit of the doubt. Cassie knew that Stella had gotten married and was currently pregnant, and understood where the mix-up came from.

I Still Got Hired

I’m sure at our upcoming meeting I’ll get an earful, but it will all be in jest. I’ll know next time to make sure of who I am talking to before I try my attempt at humor. Also, I’ll be sure to update all of my contact information to avoid mistakes like this in the future.